The Magician of Lublin. 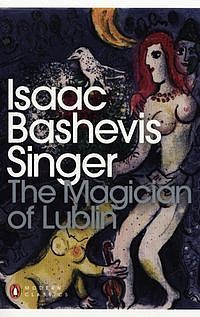 The Magician of Lublin.

Yasha the magician - sword swallower, fire eater, acrobat and master of escape - is famed for his extraordinary Houdini-like skills. Half Jewish, half Gentile, a free thinker who slips easily between worlds, Yasha has an observant wife, a loyal assistant who travels with him and a woman in every town. Now, though, his exploits are catching up with him, and he is tempted to make one final escape - from his marriage, his homeland and the last tendrils of his father's religion. Set in Warsaw and the shtetls of the 1870s, Isaac Bashevis Singer's second novel is a haunting psychological portrait of a man's flight from love.
Winner of the Nobel Prize for Literature