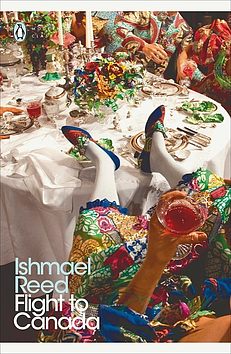 Deep in the American South, 'land of the hunted and the haunted,' three young slaves have broken free. But they have their former master hot on their heels, and they must outrun, outwit, or outgun him and his personal 'CIA' if they are to secure their freedom--all while dodging the bullets of the Civil War raging on around them. When the three men part ways, the adventure begins: the first buys up a huge number of arms in readiness for a final showdown; the second sells his body for pornographic flicks; while the third, Raven Quickskill, hero, poet, heartbreaker, swigs champagne on a non-stop jumbo jet to Canada. Flight to Canada is fun, pacey, adventurous, and touched by Reed's taste for the absurd. Reed takes us on a wild ride through a nineteenth-century Virginia that looks a lot like the West today, littered with everything from Xerox copiers to jumbo jets, and casts an unsettling sideways look at history, race and the American media.