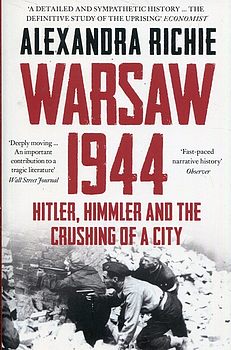 The traumatic story of one of the last major battles of World War II, in which the Poles fought off German troops and police, street by street, for sixty-three days.
The Warsaw Uprising of August 1944 was a shocking event in a hideous war. This is the first account to recall the tragedy from both German and Polish perspectives and asks why, when the war was nearly lost, Hitler and Himmler decided to return to Warsaw bent on murder, deportation, and destruction.
This was the only time in history that a European capital has ever been emptied of its entire population and destroyed entirely. Hundreds were thrown from windows, burned alive, trampled to death. The murder of 40,000 innocents on 5th August was the largest battlefield massacre of the war.
But the Poles did not give in. Organized and popular, the Uprising, which had been expected to last under a week, fought off German troops including Himmler’s most notorious SS battalions street by street, for sixty-three days.
Using first-hand accounts, Richie charts the atrocities and the breakdown of SS morale, but she also goes on to examine the long-term implications of Stalin’s refusal to help and how the Uprising affected negotiations over the fate of post-war Europe, sowing the seeds of the Cold War. But above all else ‘Warsaw 1944’ is the story of a city’s unbreakable spirit, in the face of unspeakable barbarism.