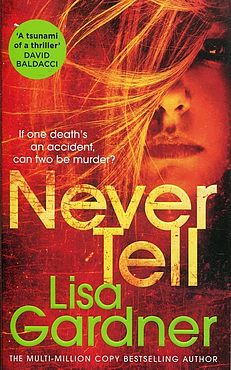 One death might be an accident. Two deaths looks like murder.
A man is shot dead in his own home, and his pregnant wife, Evie, is found with the gun in her hands.
Detective D.D. Warren instantly recognises her. Sixteen years ago, Evie also shot her own father. That killing was ruled an accident.
D.D. doesn’t believe in coincidences. But this case isn’t as open and shut as it first appears, and her job is to discover the truth.
Evie might be a victim.
Or she might be about to get away with murder again. _______________
'Never Tell is raw, visceral, emotional, the sentences come at you like MP5 rounds, and features three incredible characters, D.D., Flora and Evie, who, alone, could carry any narrative.' - DAVID BALDACCI
'Lisa Gardner has outdone herself with this powerful novel about three women, two murders, and uncountable secrets! From its stunning opening to its last thrilling page, Never Tell will captivate, surprise,and satisfy you.'- LISA SCOTTOLINE
'Never Tell shocks the system like ten thousand volts. D.D. Warren’s most gripping case yet. Brace yourself, gulp down a deep breath, and dive in.' - A.J. FINN
'Nail-biting ... Gardner’s commendable storytelling will keep fans eagerly waiting for the next outing for D.D. and Flora' - PUBLISHERS WEEKLY
'In her latest nail-biter Never Tell, Lisa Gardner knows just what her readers want and how to give it to them.' - REAL BOOK SPY