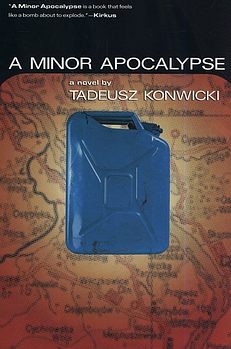 As in his novel The Polish Complex, Konwicki’s A Minor Apocalypse stars a narrator and character named Konwicki, who has been asked to set himself on fire that evening in front of the Communist Party headquarters in Warsaw in an act of protest. He accepts the commission, but without any clear idea of whether he will actually go through with the self-immolation. He spends the rest of the day wandering the streets of Warsaw, being tortured by the secret police and falling in love. Both himself and Everyman, the character-author experiences the effects of ideologies and bureaucracies gone insane with, as always in history, the individual struggling for survival rather than offering himself up on the pyre of “the greater good.” Brilliantly translated by Richard Lourie, A Minor Apocalypse is one of the most important novels to emerge from Poland in the last twenty five years.