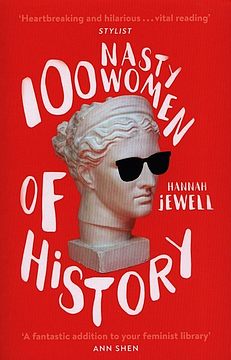 These are the women who were deemed too nasty for their times.
When you learn about (the very few) women in history, it’s hard not to wonder: why do they seem so prim and proper? The truth is, (mostly male) historians keep glossing over the real details, or leaving out the women who threatened their idea of what a woman should be like. Fake news!
But fret not. Former Buzzfeed senior writer and Washington Post pop culture host Hannah Jewell has got you covered. In 100 Nasty Women of History, Hannah will give you the brief on, among others:
Aethelflaed, who fought off Vikings at her wedding; Ching Shih, a swashbuckling pirate known as ‘The Terror of South China’; Ida B. Wells-Barnett, who fought racism with the point of her pen; Lilian Bland, who built her own plane and flew it; Rani Chennamma, who was a (literal) queen and went to war with the British; Nell Gwynn, one of the greatest hos in English history; Coccinelle, the first known trans woman to be legally married in France; Noor Inayat Khan, who may have literally punched Nazis.

And that’s just eight of them.
So if you think that Nasty Women are a new thing, think again. They’ve always been around – you just haven’t always heard of them. It’s time to get learning. These are the 100 Nasty Women of History who gave zero f*cks whatsoever. These are the 100 Nasty Women of History whom everyone needs to know about, right now.
‘A fun, hilarious read that will make a fantastic addition to your feminist library and historical knowledge’ ANN SHEN, author of Bad Girls Throughout History