The Girl Who Lived Twice. 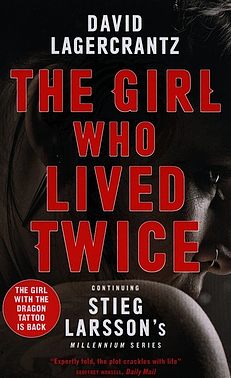 The Girl Who Lived Twice.

The girl with the dragon tattoo is finally ready to confront her nemesis, the only woman who is evidently and in many ways her match. Salander will not wait to be hunted. When she strikes it will be a double blow: vengeance for recent atrocities, and the settling of lifelong scores.
For months now Salander has been closing in on her target. She has moved from Stockholm, her hair is newly styled, her piercings are gone. She could pass for any other businesswoman. But not all businesswomen have a Beretta Cheetah beneath their jacket. They do not wield the lethal power of a hacker's genius. They do not carry scars and tattoos to remind them that they have survived the unsurvivable.
The new episode in David Lagercrantz's acclaimed, internationally bestselling continuation of Stieg Larsson's Dragon Tattoo series is a thrilling ride that scales the heights of Everest and plunges the depths of Russian troll factories. It begins with the discovery of Mikael Blomkvist's number at Millennium magazine in the pocket of an unidentified homeless man who died with the name of a government minister on his lips.
Blomkvist, at extreme risk to himself, tracks down his old friend and will protect her as far as he can. But he is powerless to crush her enemies on his own.
And for Lisbeth Salander, the personal is always political - and deadly.
About the Author David Lagercrantz was born in 1962, and is an acclaimed author and journalist. In 2015 The Girl in the Spider's Web, his continuation of Stieg Larsson's Millennium Trilogy, became a worldwide bestseller and was made into a film by Sony Pictures (2018). He is the author of the acclaimed and bestselling I am Zlatan Ibrahimovic, Fall of Man in Wilmslow, and the fifth in the Millennium series, The Girl Who Takes an Eye for an Eye.