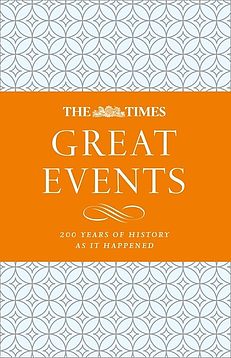 As one of Britain’s leading newspapers for more than 200 years The Times has covered every major world events as they happened. This book profiles the ones that have had the most impact on the world today from the fall of the Berlin Wall to stepping onto the Moon.
News-breaking stories as told from The Times with commentary setting each event in context. Historian and editor, James Owens, has scoured The Times archive to bring front pages from the days after world changing events along with insightful articles published at the time.
The global events covered include; • Assassination of JFK • Release from prison of Nelson Mandela • Armistice Day: First World War ends • VE Day: Second World War ends • First telephone call in 1876 • European revolutions of 1848 • Suez canal opens in 1869 • First personal computer 1977