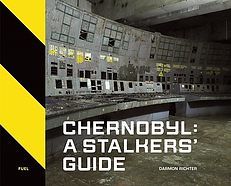 This photography-led book reveals the story of Chernobyl today, with unprecedented access to the Zone, it takes the reader into previously undocumented areas. Since the first atomic bomb was dropped, humankind has been haunted by the idea of nuclear apocalypse. That nightmare almost became reality in 1986, when an accident at the USSR’s Chernobyl Nuclear Power Plant triggered the world’s worst radiological crisis. The events of that night are well documented – but history didn’t stop there. Chernobyl, as a place, remains very much alive today. In Chernobyl: A Stalkers’ Guide, researcher Darmon Richter journeys into the contemporary Exclusion Zone, venturing deeper than any previously published account. While thousands of foreign visitors congregate around a handful of curated sites, beyond the tourist hotspots lies a wild and mysterious land the size of a small country. In the forests of Chernobyl, historic village settlements and Soviet-era utopianism have lain abandoned since the time of the disaster – overshadowed by vast, unearthly mega-structures designed to win the Cold War. Richter combines photographs of discoveries made during his numerous visits to the Zone with the voices of those who witnessed history – engineers, scientists, police and evacuees. He explores evacuated regions in both Ukraine and Belarus, finding forgotten ghost towns and Soviet monuments lost deep in irradiated forests. He gains exclusive access inside the most secure areas of the power plant itself, and joins the ‘stalkers’ of Chernobyl as he sets out on a high-stakes illegal hike to the heart of the Exclusion Zone.