The social space-time of economic activity. Towards Economics of Values 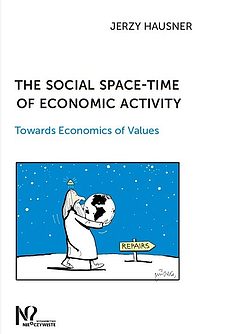 The social space-time of economic activity. Towards Economics of Values

The author argues that the basic weakness of neoclassical economics is the eradication of value, which reduces economics to market valuation and results in defining the market as a self-regulatory mechanism.
The danger lies in the fact that contemporary economic activity is a linear process, which means that we focus on generating instrumental values, i.e. achieving a surplus in relation to the costs incurred in running our business. The only measure of success is profit, and we ignore the truth that, along the way, we also initiate many processes that destroy values. The consequences are frightening because in this manner we undermine the ability to sustain the process of economic activity itself.
The author believes that the aim should be to move away from a linear economy toward a circular economy in which the existing resources are preserved, renewed, and multiplied, while new ones are being created. And this cannot be achieved without restoring to economics the issue of values - values defined and interpreted in non-utilitarian terms. Neither can it be achieved without restoring a central place to culture, which provides the foundation for the functioning of the community by binding it together.
The transition from an opportunistic and transactional market play to the desired relationality means shaping a new social space-time. It also requires a fundamental change that must take place primarily in the basic microstructures of social life, the main organizations of collective activity. Hence the concepts of Firm-Idea, City-Idea, and University-Idea, where the idea is a link understood as an organization-specific method of forming the basic values. This is not a search for a universal idea, but an attempt to provide a conceptual framework within which various perspectives can be successfully used.
The author’s reflections on the new economic theory of value take into account the entire contemporary social and economic context, including the need for a new economic policy in the face of the global crisis, as well as the challenges associated with the domination of digital economy.
The book is unique in its interdisciplinary character and should raise the interest of researchers from many scientific domains, particularly economists, philosophers, sociologists, historians and political scientists. It will also offer a valuable a source of knowledge and inspiration for socio-economic policy makers, including parliamentarians and persons representing both central government institutions and all local government and social initiatives.