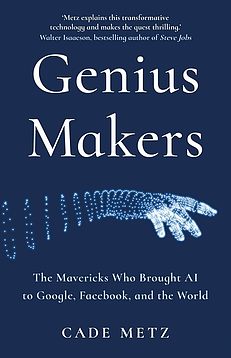 The definitive account of the race to create artificial intelligence
'This colourful page-turner puts artificial intelligence into a human perspective . . . Metz explains this transformative technology and makes the quest thrilling.' Walter Isaacson, author of Steve Jobs ___
Long dismissed as a technology of the distant future, artificial intelligence was a project once consigned to the fringes of the scientific community. Then two researchers changed everything. One was a 64-year-old computer science professor with a back problem so severe he could not drive or fly. The other was a 36-year-old neuroscientist and chess prodigy. Though they took very different paths, together they helped catapult AI to the forefront of our daily lives and, in the process, created a business worth billions.
This is the story of that technological revolution and of the arms race it has sparked among companies that range from Google to Facebook to OpenAI. It's the story of growing international rivalry to achieve major new breakthroughs. And it's a story that shows both the inventive best of humankind and its darker side, as advances have been counter-balanced by issues of prejudice, bias and the invasion of privacy.
New York Times Silicon Valley journalist Cade Metz draws on unparalleled access to all the major players to create an extraordinarily vivid account of a revolution over five decades in the making. And he poses the questions that will dominate the next half-century: where will AI take us next? Are systems with truly human intelligence on the horizon? And, if so, where does that leave us?