A Brief History of the British Army. 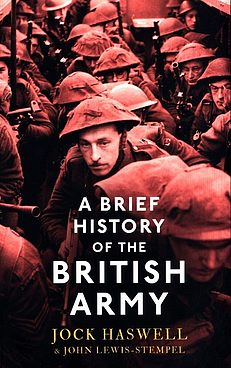 A Brief History of the British Army.

The story of the British Army has many sides to it, being a tale of heroic successes and tragic failures, of dogged determination and drunken disorder. It involves many of the most vital preoccupations in the history of the island – the struggle against Continental domination by a single power, the battle for Empire – and a cast pf remarkable characters – Marlborough, Wellington and Montgomery among them.
Yet the British, relying on their navy, have always neglected their army; from the time of Alfred the Great to the reign of Charles II wars were fought with hired forces disbanded as soon as conflict ended. Even after the stuggles with Louis XIV impelled the formation of a reulgar army, impecunious governments neglected the armed forces except in times of national emergency.
In this wide-ranging account, Major Haswell sketches the medieval background before concentrating on the three hundred years of the regular army, leading up to its role in our own time. He presents an informed and probing picture of the organization of the army, the development of weaponry and strategy – and the everyday life of the British soldier through the centuries.
John Lewis-Stempel has brought Major Haswell’s classic work right up to date by expanding the section on the dissolution of empire to include a full account of Northern Ireland and the Falklands War. He has added a new chapter to cover the Gulf War, Bosnia, Afghanistan and Iraq; also the increasing role of special forces and the amalgamation of regiments.