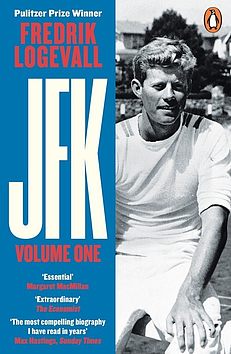 The Pulitzer Prize-winning historian's much-garlanded masterpiece: 'The most compelling biography I have read in years' Max Hastings
By the time of his assassination in 1963, John F. Kennedy stood at the helm of the greatest power the world had ever seen. Born in 1917 to a striving Irish American family that had become among Boston's wealthiest, Kennedy knew political ambition from an early age, and his meteoric rise to become the youngest elected president cemented his status as one of the most mythologized figures in modern history. Beckoned by this gap in our historical knowledge, Harvard professor Fredrik Logevall has spent much of the last decade combing through material unseen or unused by previous biographers, searching for and piecing together the 'real' John F. Kennedy -- resulting in a masterpiece that reviews have agreed will be the definitive work. This first volume of this sweeping two-part biography spans the first thirty-nine years of his life, revealing his early relationships, his formative and heroic experiences during World War II, and his deeply fascinating romance with Jackie Kennedy. In examining these pre-White House years, Logevall chronicles Kennedy's extraordinary life and times with authority and novelistic sensibility, putting the reader in every room where it happened. This landmark work offers the clearest portrait we have of a remarkable figure who still inspires individuals around the world.