A Line to Kill. 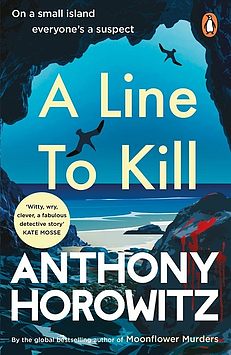 A Line to Kill.

By the global bestselling author, Anthony Horowitz, the third novel in his acclaimed Hawthorne and Horowitz series. The Russian mafia, a strange religious order and not one but two murders - stand by for a hugely enjoyable, twisty turny read. *** It began with an appearance on BBC’s Question Time. I’ll admit I was nervous. In fact, I was terrified. You have no what it’s like to occupy the “fifth chair”, sweating in the lights two places from David Dimbleby, sparring against practised politicians, just waiting for the audience to tear you apart. But in fact everything was going quite well until a member of the audience asked me a question that on the face of it seemed completely inane and which left me floundering on live TV. From that moment on, I simply fell apart. The question, of course, had been asked by Daniel Hawthorne. But when I searched for him after the filming was over, Hawthorne had disappeared. A crew member told me that he’d seen the private detective being strong-armed into a car which had driven off at speed. And when I got back to London, it seemed that he had disappeared. His flat was empty. Nobody had seen him. He didn’t answer his phone. By now I had become quite worried about him, which was why I decided to track down his ex-wife, Jayne, in Gants Hill. It was a mistake. First of all I found myself teaming up with a completely headstrong and unpredictable woman who was still in love with Hawthorne even if she couldn’t live with him. Her twelve-year-old son was troubled, borderline psychotic. And suddenly I found myself drawn into their world, searching for Hawthorne in the shadow of a massive property deal, the Russian mafia, a strange religious order and not one but two murders. Was Hawthorne already dead? Would I live long enough to find out?