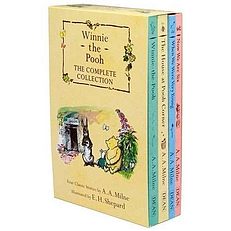 This slipcase contains four wonderful Winnie-the-Pooh titles - Winnie-the-Pooh, The House at Pooh Corner, When We Were Very Young and Now We Are Six.
A.A.Milne was born in London in 1882. He began writing as a contributor to Punch magazine, and also wrote plays and poetry. Winnie-the-Pooh made his first appearance in Punch magazine in 1923. Soon after, in 1926, Milne published his first stories about Winnie-the-Pooh, which were an instant success. Since then, Pooh has become a world-famous bear, and Milne's stories have been translated into approximately forty-different languages.