Speed Aggression Surprise. The Untold Secret Origins of the SAS 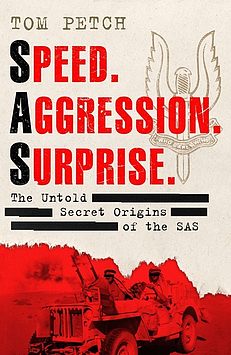 Speed Aggression Surprise. The Untold Secret Origins of the SAS

Ex-SAS Commander and award-winning filmmaker provides a fascinating, myth-busting story of the REAL origins of the SAS, for fans of Ben Macintyre
The official origin story of the SAS is a myth. This is the real story of how the world's preeminent Special Forces came into existence.
It's a fly-on-the-wall, character-driven story of the origins of a new means of warfare, forged from the wreckage of Dunkirk. It's the birth of subliminal methods - guerrilla Commando units that could inflict devastating 'mosquito stings' on larger, and better-armed opponents.
It's a never-before-told account of how the shock of defeat propelled an unlikely group of renegades into the frontline of the war. An adventure that reaches back from the trenches of the Western Front, to high piracy in the deserts of North Africa, to the final assault on Germany. It's a concept that takes shape in the corridors of headquarters, on long nights at the long bar in Shepheard's Hotel in Cairo, and on the deadliest battlefields in history, around a cast of insubordinate mavericks who didn't fit into the tight hierarchy of the armed forces.
Flashing between dramatic accounts from the field and back-channel power negotiations in Westminster, reeling in a cast of characters that includes Evelyn Waugh, Ernest Hemingway and Randolph Churchill, as well as a lot of alcohol, amphetamines and grenades, this is the real story of the SAS as you have never seen it before.