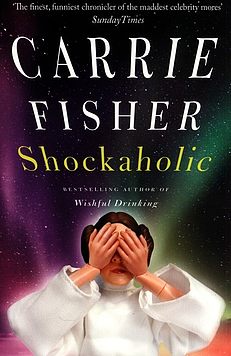 By the time Carrie Fisher wrote Shockaholic, it had been a roller coaster of a few years since her Tony- and Emmy-nominated, one-woman Broadway show and New York Times bestselling book Wishful Drinking. The electro-convulsive shock therapy she's been undergoing is threatening to wipe out (what's left of) her memory. She lost her beloved father, Eddie Fisher, but also her once-upon-a-very-brief-time stepmother, Elizabeth Taylor, as well as over forty pounds of unwanted flesh, all the while staying sober and sane-ish. Yes, of course, Shockaholic is laugh-out-loud funny, acerbic, and witty as hell. But it also reveals a new side of Carrie Fisher that may even bring a pleasant shock your way: it is contemplative, vulnerable, and ultimately quite tender. From the woman who took us to space and back, we bring you Carrie Fisher: the woman, mother, daughter and of course, Princess. Carrie Fisher, the daughter of Debbie Reynolds and Eddie Fisher, became an icon when she starred as Princess Leia in the original Star Wars trilogy. Her star-studded career included roles in numerous films such as The Blues Brothers and When Harry Met Sally. She was the author of four bestselling novels, Surrender in the Pink, Delusions of Grandma, The Best Awful and Postcards from the Edge, which was made into a hit film starring Shirley MacLaine and Meryl Streep. Her first work of non-fiction was the cult hit Wishful Drinking. Carrie's experience with addiction and mental illness – and her willingness to talk honestly about them – made her a sought-after speaker and respected advocate. She was truly one of the most magical people to walk among us.