Migrations in the Slavic Cultural Space From the Middle Ages to the Present Day. 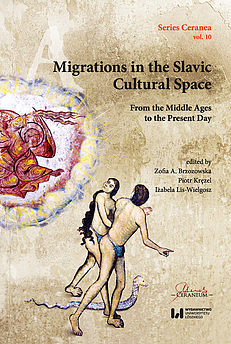 Migrations in the Slavic Cultural Space From the Middle Ages to the Present Day.

The volume consists of materials that were presented during the international scientific conference entitled Migrations in the Slavic Cultural Space, held at the Department of Slavic Philology of the University of Lodz on May 6, 2022, in cooperation with researchers from the Institute of History Belgrade. This symposium received an extraordinary amount of attention in the circles of specialists representing various disciplines of the humanities and social sciences. The volume has a three-part structure. The first, which has a strictly monographic character, is comprised of five articles addressing the issue of migration of the Serbian ethnos in the 16th_ 13th centuries. The texts included in the other two sections provide a historical, cultural, and literary background for the topic explored in the first part, broadening the reader' s knowledge about the hi story of Southern, Western and Eastern Slavs from the Middle Ages to the 21 st century. The phenomenon of migration has been interpreted here on many semantic levels, situated in various discourses, and examined in diverse categories, such as historical and political, economic and social, religious and cultural. It has been studied directly and indirectly in the ideological, spiritual, emotional, and intellectual spaces. It is from such a wide-ranging perspective that this monograph presents the phenomenon of migration, referred to and identified within the boundaries of the entire Slavic region, defined through the prism of fixed and variable, universal and local categories and cultural implications.