Europe's Growth Champion. Insights from the Economic Rise of Poland 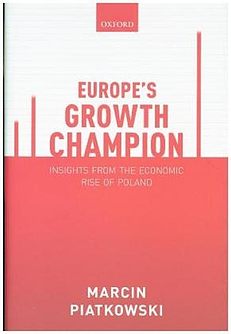 Europe's Growth Champion. Insights from the Economic Rise of Poland

What makes countries rich? What makes countries poor? Europe's Growth Champion: Insights from the Economic Rise of Poland seeks to answer these questions, and many more, through a study of one of the biggest, and least heard about, economic success stories.
Over the last twenty-five years Poland has transitioned from a perennially backward, poor, and peripheral country to unexpectedly join the ranks of the world's high income countries. Europe's Growth Champion is about the lessons learned from Poland's remarkable experience, the conditions that keep countries poor, and the challenges that countries need to face in order to grow. It defines a new growth model that Poland and its Eastern European peers need to adopt in order to continue to grow and catch up with their Western counterparts.
Europe's Growth Champion emphasizes the importance of the fundamental sources of growth- institutions, culture, ideas, and leaders- in economic development. It argues that a shift from an extractive society, where the few rule for the benefit of the few, to an inclusive society, where many rule for the benefit of many, was the key to Poland's success. It asserts that a newly emerged inclusive society will support further convergence of Poland and the rest of Central and Eastern Europe with the West, and help to sustain the region's Golden Age. It also acknowledges the future challenges that Poland faces, and that moving to the core of the European economy will require further reforms and changes in Poland's developmental character.