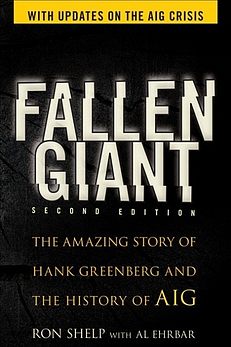 A unique insider view into the recent AIG crisis and Hank GreenbergFor nearly 40 years, Maurice "Hank" Greenberg was one of the most powerful CEOs in America. He built American International Group (AIG) from a second-rate insurer with a great Chinese franchise into one of the world`s most profitable companies. But times have certainly changed, and now, in the Second Edition of Fallen Giant, author Ronald Shelp-who worked alongside Greenberg and within the AIG organization for many years-with the help of Al Ehrbar, sheds light on both AIG, the company, and Hank Greenberg, the man.This fully updated Second Edition digs deep to uncover the latest developments for both Greenberg and AIG, such as the many lawsuits underway, including a criminal trial that will send five men-one who still works for Greenberg-to prison. It also chronicles the incredible story of how AIG was rescued by the Fed, and why the government had no choice in the matter.* Includes new insights into the latest developments for both AIG and Hank Greenberg* Reveals the real reasons behind the U.S. government`s unprecedented bailout of AIG* Explores AIG`s history, starting in Shanghai in 1919, along with the downfall of its CEO* Offers rare insights into how AIG almost collapsedFilled with international intrigue and expert business acumen, the Second Edition of Fallen Giant paints a compelling portrait of both the past successes and current crises of Hank Greenberg and AIG.