Sweeney Todd The String of Pearls. 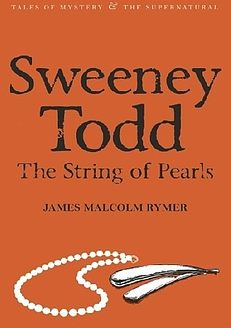 Sweeney Todd The String of Pearls.

The exploits of Sweeney Todd, ‘The Demon Barber of Fleet Street’, have been recounted many times in plays, films and musicals, but the origins of the character largely were forgotten for many years. The String of Pearls - the original tale of Sweeney Todd, a classic of British horror - was first published as a weekly serial in 1846-7 by Edward Lloyd, the King of the Penny Dreadfuls. One of the earliest detective stories, it became an important source for Bram Stoker's Dracula, but it was after over 150 years of obscurity that it appeared first in book form in the Wordsworth edition published in 2005.
The one great mystery that has surrounded the book is who the author was - or was it possibly the work of more than one man? In his new introduction to this fully revised second edition, Dick Collins, by means of detailed research of contemporary records, has established finally the identity of the creator of this legendary figure.
So here is the original story of the terrifying owner of that famous London barber-shop, and the secret recipe for Mrs Lovett's delicious pies…