The Pianist of Yarmouk. 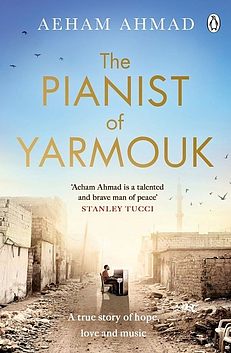 The Pianist of Yarmouk.

'In amongst the wreckage scenes of hope. An amazing man - Ahmad played the piano just to spread love' Jeremy Vine, BBC Radio 2
The incredible and inspirational true story of one young man's struggle to find peace during war, and the power of music to bring hope to a desperate nation.
One morning in war-torn Damascus, a starving man drags a piano into a rubbled street. Everything he once knew has been destroyed by war.
Amidst ruin and despair, he begins to play. He plays of love and hope, he plays for his family and his fellow Syrians. He plays even though he could be killed for doing so.
As word of his defiance spreads around the world, he becomes a beacon of hope and even resistance. Yet he fears for his wife and children - the more he plays, the more he and his family are endangered until, finally, he must make a terrible choice . . .
Aeham Ahmad's spellbinding and uplifting true story tells of the triumph of love and hope, the incredible bonds of family, and the healing power of music in even the very darkest of places.