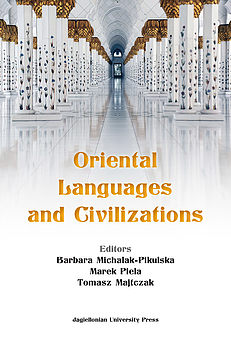 The volume consists of six parts devoted to literature, languages, history, culture, science, religions and philosophy of the Eastern World. Its aim is to portray the present-day state of oriental studies, which are here understood predominantly as philologies of Asia and Africa, but also as a field of study including other, adjacent disciplines of the humanities, not neglecting the history of oriental research. The book’s multidisciplinary content reflects the multi- and often interdisciplinary nature of oriental studies today.

Part 3 (History) investigates Napoleon’s campaign in the Middle East, Middle Eastern-Russian relations in the 18th century, the history of Seljuk Empire and the works of a Moroccan historian, Ǧaʿfar Ibn Aḥmad an-Nāṣīrī as-Salawī.

Part 4 (History of Oriental Studies) deals with the history of oriental studies in Kraków and with the problems of a critical edition of the Quran.

Part 6 (Religion and Philosophy) explores some philosophical concepts of the Confucian ethics and the contribution of Karīma Bint Aḥmad Al-Marwaziyya to preservation and transmission of some religious traditions of Islam.

Marek Piela, PhD , Assistant Professor at the Arabic Department of the Institute of Oriental Studies of the Jagiellonian University in Krakow (Poland). He teaches practical Hebrew and Theory of translation.

Tomasz Majtczak, PhD , Assistant Professor at the Institute of Oriental Studies of the Jagiellonian University in Krakow (Poland). He teaches practical Hebrew and Theory of translation. In his academic interests he focuses on Old and Classical Japanese, historical grammar and genetic relationships of Japanese, Old Turkic, Yiddish and historical linguistics and etymology.