Acid For The Children. A memoir 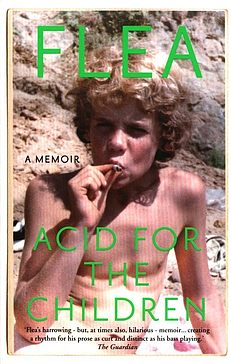 Acid For The Children. A memoir

The iconic bassist and co-founder of the Red Hot Chili Peppers tells his fascinating origin story, complete with all the dizzying highs and the gutter lows you'd want from an LA street rat turned world famous rock star.
Michael Peter Balzary was born in Melbourne, Australia, on October 16, 1962. His more famous stage name, Flea, and his wild ride as the renowned bass player for the Red Hot Chili Peppers was in a far and distant future. Little Michael from Oz moved with his very conservative, very normal family to Westchester, New York, where life as he knew it was soon turned upside down. His parents split up and he and his sister moved into the home of his mother's free-wheeling, jazz musician boyfriend, Walt--trading in rules, stability, and barbecues for bohemian values, wildness, and Sunday afternoon jazz parties where booze, weed, and music flowed in equal measure. Michael was frightened by the lack of order in his new reality and his volatile new stepfather, but found his salvation in the world of passionate musicians the Walt exposed him to. There began his life-long journey to channel all the frustration, loneliness, love, and joy he felt into incredible rhythm.