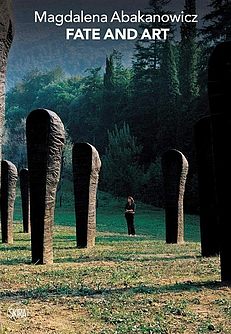 Magdalena Abakanowicz (1930) today is revered for her uncompromising, individualistic vision developed in her native Poland under the hostile eyes of the repressive Communist regime that was in power for most of her adult life. She has personally witnessed the worst of humanity’s instinct for destructive behavior and has made art that unflinchingly presents the human condition. She had, by the 1960s, gained the beginning of an international reputation as a sculptor in soft materials with the creation of monumental environments called Abakans. Always alert to build on her personal independent vision, she has created large groups of human figures out of old burlap sacks and resin. Her 80 backward-seated figures and 50 standing figures have attracted widespread attention and evoked provocative cultural and political associations wherever they have been shown. At the Venice Biennial of 1980, her ambitious exhibition in the Polish Pavilion caused a sensation among critics and the general public. Her retrospective moved to America from the Musée d’Art Moderne de la Ville de Paris to be shown in seven important museums. Since then the level and variety of her work has been nothing short of astonishing. She changed sculpture from “object to look at” into “space to experience”. Monumental, powerful compositions in bronze or stone, iron or concrete have been created for specific locations—the Gori Collection in Italy, the Olympic Park in Seoul (Korea), the Israel Museum in Jerusalem, Vilnius (Lithuania), and Chicago’s Grant Park—and are permanently installed as environments accessible to people.She has transformed the casting process into a way of building individual bodies with personal expression. Her largest group of figures (the environment in Chicago) consists of 106 headless shells in walking movement, made of material that resembles tree bark or rags from a mummy. She has also worked with tree trunks that she has armed with metal (War Games) and built multi-figurative compositions out of welded stainless steel (King Artur’s Court).