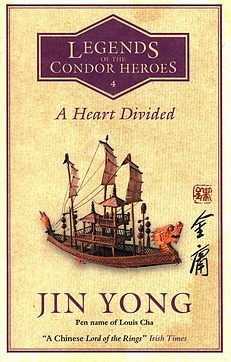 Guo Jing and Lotus have escaped Qiu Qianren’s mountain stronghold on the condors’ backs, but Lotus carries a wound that will surely kill her.
Their only hope lies in the healing powers of Duan, the King of the South. Little do they know that to seek an audience with this mysterious figure will place him in mortal danger himself. Meanwhile, many li away on Peach Blossom Island, a plan has been hatched that could tear the two lovers apart for good. And, with Moon Festival approaching, Guo Jing is honour bound to take part in a long-awaited martial contest at the Tower of Mist and Rain in Jiaxing.
Yet the greatest threat to their happiness stems from Guo Jing’s past. He is still betrothed to Genghis Khan’s daughter. Rejoining the Mongol army could help him to avenge his father – but it may force him to take the field against the soldiers of his true homeland, splitting his heart and soul in two.