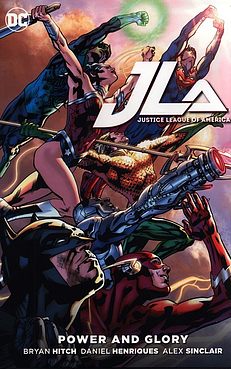 Bryan Hitch makes his triumphant return to DC Entertainment with theworld's most powerful heroes, the JUSTICE LEAGUE OF AMERICA! It's massivewidescreen action and adventure from superstar writer/artist Hitch, as theLeague comes up against an armada of aliens heading for Earth that claims to bea peaceful religious tribe. But something sinister is lurking in theirranks...something with ties to ancient Krypton! And more importantly...whoseside will the Man of Steel fall on? With the classic line-up of Superman,Batman, Wonder Woman, Green Lantern, The Flash, Aquaman and Cyborg, JUSTICELEAGUE OF AMERICA: POWER & GLORY sees the World's Greatest Heroes doing whatthey do best: fighting impossible threats too big for just one of them! Thistrade paperback collects issues #1-3, #5-12 and ANNUAL #1.