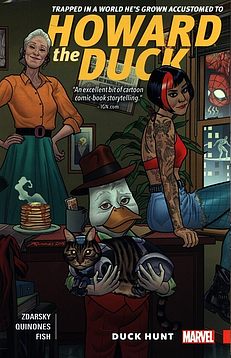 Trapped in a world he's grown accustomed to! The flightless fowl gets relaunched again, with the exact same superstar creative lineup as before -Chip Zdarsky and Joe Quinones! But this time, the entire universe is after Howard! Is it because he is so handsome? Doubtful. Cuddly? Probably not. But there is a reason, and you'll find out when you read the story they could only call "Duck Hunt"! Plus, the two most sensational, fan-favorite, internet-breaking Marvel team-ups of the year! One hero who's a little nutty meets another who's downright quackers -yes, because YOU demanded it (you know who you are), here comes Squirrel Girl! And, in a tale that will launch a thousand cosplay double acts, it's Howard and Gwenpool! The Duck is back, and this means "Waugh!"