Textbook on the first amendment: freedom of speech and freedom of religion. 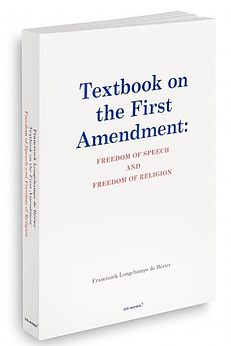 Textbook on the first amendment: freedom of speech and freedom of religion.

This textbook is the result of the ten years’ experience of teaching about the First Amendment to the United States Constitution. The textbook provides materials for discussion and consists only of selected opinions of American courts which have been abridged to enucleate the main problem and not burden the reader with all the details, and also to avoid discussing legal issues that are not directly related to the present subject matter. The “Textbook on the First Amendment” is about respect for and appreciation of the freedom of speech and freedom of religion. The United States Supreme Court is the ultimate defender of liberty and the pre-eminent guardian of the two freedoms, which is why the overwhelming majority of cited sentences are from that Court.Franciszek Longchamps de Bérier is a law professor at the Jagiellonian University in Kraków; he graduated from the University of Warsaw’s Faculty of Law and Administration and has an LL.M. awarded by Georgetown University Law Center; he is a Catholic priest and is an expert on bioethics for the Polish Episcopal Conference as well as a member of the Scientific Committee on Ancient Culture and of the Committee of Legal Sciences of the Polish Academy of Sciences.