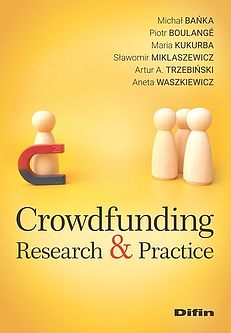 The advent of crowdfunding is linked to the changes that transpired in the economy after 2008 triggered by the financial crisis and the very rapid progress in the digitalization of the economy across the globe. The financial crisis compelled businesses to look for new methods of funding, and digitalization and the development of the internet created an opportunity to source funding from the community (natural persons and businesses) formed by the crowdfunding platforms in operation. Even though some 14 years have passed since the beginning of that crisis and large-scale research has been underway since 2010, as evidenced by the significant growth in the number of publications since that time, it turns out that this area has not been comprehensively described and analyzed. There is a major gap especially when it comes to the crowdfunding market in Poland. The analyses in the first part of this book largely fill that gap. These analyses pertain not just to the development of crowdfunding in Poland but also to the impact exerted by the number of crowdfunding platforms and the economic and financial standing of issuers after completing their campaigns on the actors and ventures present on the market.